Internal Controls – A Key Ingredient to Success!10 July 2018Next

Cryptocurrency (and What it Means for Your Taxes)20 August 2018

When the chairman of RJI International CPAs was asked if he might add, say, 10 more this year, he quickly said, “I hope not.”

Ramirez, who doesn’t want the complexities of managing more than 50 people, might not have much choice since the international tax business at the Irvine-based accounting firm is booming.

“I could see us easily being at 60 or 70 people” in coming years, he said. “If you do a good enough job at something, you just manage the growth.”

The federal tax law that took effect this year introduced a number of changes affecting companies doing business overseas, including a “territorial system.” Ramirez said that besides knowing how to repatriate past profits made overseas, companies must also learn how to reduce taxes on future profits.

The tax law “allows U.S. companies that compete internationally to be on a level playing field,” he said. “It’s very significant. Clients are asking us how to operate in an international marketplace.”

RJI, short for Ramirez Jimenez International, reported 49 employees in May, up by three from a year earlier and from 40 in 2016, based on the Business Journal’s annual list of accounting firms.

When Ramirez joined in 1991, the firm employed 120 certified public accountants. He served as chief executive from 1993 to 2013, trimming work in areas such as nonprofits and government to concentrate on sectors including international tax.

Ramirez found international tax law intriguing when he began studying it in the 1980s at PriceWaterhouse. He found that many countries have “a desire to overtax each transaction” and that tax laws can be interpreted in various ways.

“I get bored easily, so I look for opportunities to solve complex problems,” he said. With international tax laws, “There are no right answers. There are mostly right answers.”

Much of the firm’s initial work was with companies opening factories, often referred to as maquiladoras, on the Mexican side of the border with the U.S. Its international business expanded until it even had an office in China. In recent years, the firm has done business with companies working in 20 countries, including helping an Orange County real estate investment trust establish a business in Saudi Arabia, and advising an Afghan construction firm on working with the U.S. government.

RJI is also an independent member of DFK International, an association of 220 independent accounting firms across 435 offices that can provide locally-based advice from 93 countries.

Half of $1K an Hour
Ramirez is one of three partners, all of who graduated from California State University-Fullerton and who’ve worked at the Big Four accounting firms. Fernando Jimenez took over as chief executive from Ramirez in 2013, and Gordon MacLean is the director of audit services. Ramirez and Jimenez are bilingual and have a master of science degrees in taxation from Golden Gate University.

Ramirez is well-known in OC business circles for serving on a number of boards, including as treasurer of the Lincoln Club, a group of Republican business executives, and an investment committee chairman of the Orange County Catholic Foundation. He’s also a fellow on the American Board of Forensic Accountants.

He said the company is known today as a “corporate accounting and international shop.”

Besides taxes, it provides a variety of services, such as management consulting, business valuations and audits of publicly traded companies.

One of its edges is management’s experience working at the Big Four accounting firms, he said. “For a smaller company with less than $100 million in sales that doesn’t want to spend $1,000 an hour at a Big-Four company, they can hire an ex-Big-Four accountant with a master’s degree in tax law and 30 years of experience at half the price.”

Busy Bees
Ramirez, who was born and raised in OC, said the county has had “an amazing growth pattern” with plenty of opportunities for CPAs. Where some see manufacturing leaving, he said he sees potential in industries like biotechnology and medical devices. He praises the University of California-Irvine for producing high-quality students who are becoming business leaders.

“You have the best weather in the world and a highly educated workforce. There’s enough to keep a CPA busy.” 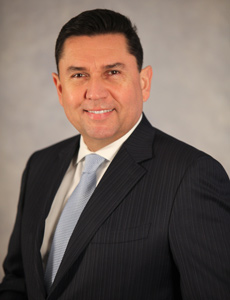 Manuel is Chairman/International Tax Partner at RJI CPAs, with specific experience in international and multi-state taxation, M&A transactions, and representation before the IRS and state regulatory agencies. Manuel can be reached at 949-852-1600 or MRamirez@rjicpas.com.

About RJI International CPAs
Established in 1980, RJI specializes in audit, accounting, corporate and interna­tional tax issues for publicly traded and privately held companies. RJI is PCAOB registered and the Southern California member firm of DFK International, one of the largest accounting networks in the world.