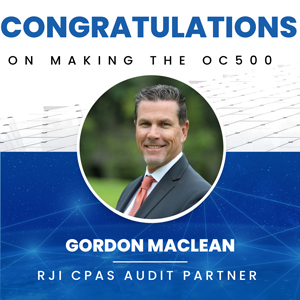 Gordon has been an audit partner with RJI CPAs for over 11 years and specializes in audits of publicly traded and privately held businesses. Gordon has been in the public accounting field for over 36 years and spent 20 years at KPMG LLP’s Orange County office, including seven years as an Audit Partner. In addition, he spent five years as an Audit Partner for a large regional CPA firm in Irvine, CA.

He is a member of the American Institute of Certified Public Accountants (AICPA), the California Society of Certified Public Accountants (CSCPA) and participates on the Leadership Board of Seneca Orange County. He is an Advisory Board Member for California State University, Fullerton on the Executive Council. In addition, Gordon is a coach and manager for the Santa Margarita Little League and is a member and volunteer at Saddleback Church.